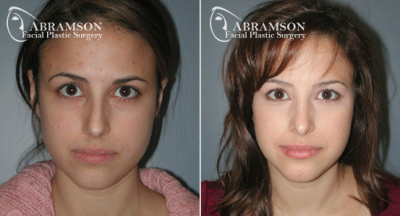 In this video, Dr. Abramson discusses some nose cosmetic complaints he most often hears about the nose that drive people to consider Rhinoplasty.

One of the most nose cosmetic complaints that patients have is that they have a hump on top of their nose. Many times when I ask a patient, which pictures do you like to delete from your phone, it’s usually the side pictures. They may or may not have a parent or grandparent that also has that, or sometimes their parents haven’t told them that they actually had theirs fixed, too. Another common complaint that patients have is that their tip looks too boxy, or looks too square, or is too big, or looks like one parent or another.

Generally in those scenarios, we will look at the patients total facial proportion, and make sure that we try to communicate well what can and can’t be accomplished so that we can make the nose exactly as the patient would like it to be, but not make it too small or leave it too large as compared with the rest of the structures of the face, such as the eyes and the cheeks, prominent or poorly projected chin. I think of the nose as 3 parts: you have the bony part at the top, you have the middle portion, and then you have the tip of the nose. All of those have to be in concert in order to have a nice nose that works well and that you’re proud of.

Dr. Abramson performs Rhinoplasty procedures in his own surgical suite in Atlanta, GA, a convenient drive for those in Buckhead, Dunwoody, Sandy Springs, Marietta, Roswell, Alpharetta and beyond.